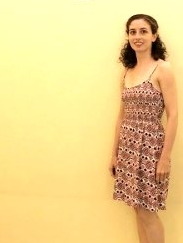 Silvia is a graduate of the Institut del Theater in Barcelona, her hometown. From 1993 to 2002 he worked at the Ballet de Euskad, the Mexican National Opera and the National Theater in Mannheim, Germany. She has performed in classical roles such as Pas de Vendange in Gisel, The Four Swans in the Swan Lake, The Shadows of the Bajadeerie, The Nutcracker, and contemporary dance works by Mark Goden, Octavio Zeyvy, Antonio Gomez and Mark McClain, among others. In 2003, she moved to London to study at The Place, and completed a Master of Arts degree in contemporary dance and choreography. She has lived and taught dance in Finland since 2007.

"Although at first studied the Vaganova method, later I also studied in a number of different ballet techniques, primarily Cuban and American, modern dance, and Graham, Cunningham and release- and somatic techniques. My work has been most influenced by Feldenkrais and release dance techniques. In my lessons, we focus on aligning movements and the proper use of strength and breathing to increase my students’ knowledge of their own bodies, reduce tension, and maximize the benefits of different exercises. I enjoy working and understanding movement from different perspectives, respecting aesthetics and the rules of technology as in ballet, but always working from the inside movement, aware of body and expression. "